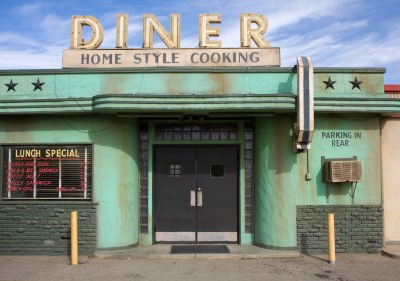 She owned a restaurant in the desert that had copper kites pinned to the walls like flies to dried up lemonade. There were other things too that filled the room. Couples sat at low-lit tables and three chefs had the same hairdo; stiff little Mohican waves that curl at the tip.

She’d been here longer than she expected. She’d purchased the restaurant, a home, and a pure bred Irish Setter. She bit her nails and soaked her feet every night after work.

What had she left behind for the high altitude and ancient, dying Junipers?

The south wall of the restaurant turned a silvery claret while a woman having dinner put her wedding ring down on the table in front of the man across from her. He held the empty finger and massaged it; his expression, slightly bored but tender.

In the kitchen, she prepped the powdered milk for the next day and picked out a fallen black hair. The silky powder slid down the bowl like a ski bum’s dream. The smell… that wanting to be real and whole smell, the silky texture of the powder; how it looked like it could be something its not.

She asked chef number 2 to finish the milk and took Jake, the Setter for a walk in time with the closing desert light. A scrawny fox dashed into the sage brush as Jake bumbled out the back door of the kitchen. Sounds began to unwrap her thoughts like unopened cans.

Her husband waited for her in the yellow Chevy.

The woman from the restaurant walked towards her car. Jake ran to her, excited and familiar. She stood in between the Chevy, Jake, the woman and watched in slow motion as the woman repeated a gesture she had known for how long? weeks? days? months?, and touched Jake’s muzzle. He licked her hand.

The lake was almost invisible with so much dust and moving panoramas of clouds–sky drama. It was hard for her to hold still; to see it. But she stared with hope hearing the reassuring tinkle of burro bells nearby. Her husband approached now. She let the noise of his guilt fall past her ears to the prickly pear cactus as she’d asked him for the keys.

She called Jake, not looking at the woman. They got into the beat up Chevy and drove. The mesas to the right of her reached towards the distance; the fluted clefts the color of indigo, vermillion, the surfaces as orange as Jake’s coat. They drove until the grey cliffs and speckled sage consumed her in a delicate but intense invitation.

It won’t be long now.