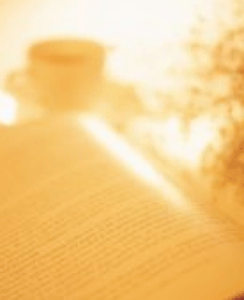 Violet says, “No.”
I say, “Yes.”
The second hand on the plastic Garfield clock above the china cabinet ticks and inches forward. Violet doesn’t remember buying the clock at a garage sale in Woodburn last summer. We’re sitting at her kitchen table, and I’ve been working on her for ten minutes now, trying to get her to come out to the garden with me. The fresh air would invigorate her, and I want her to see the yellow heads of the daffodils that she doesn’t remember planting.
Again, she says, “No.”
“Why not?” I ask.
“Because.”
“That’s not an answer.”
“Is to.”
“We’re not in grade school anymore,” I tell her. Sometimes I get impatient. I can’t help it.
She says, “So?”
I say nothing. Garfield continues to tick away the seconds. Violet sits across from me, her hair tied into a neat silver bun and her hands folded primly on the table in front of her. She sits up straight and looks directly into my eyes, without blinking. I fidget and can’t seem to find a comfortable position on my hard vinyl chair.
I try a new tack: “Ok, listen. There’s a black-eyed junco outside, and a squirrel. They’re both fighting over the same feeder. The squirrel has figured out that if he hangs upside down on the branch from his toes, he can reach the hole in the feeder. But the junco keeps flying in and stealing the sunflower seeds, which makes the squirrel hysterical. He’s trying to protect his hoard, while keeping his balance.”
Violet thinks for a moment, then laughs.
“Would you like to go outside and see?” I offer.
“Yes,” she says. My hunched shoulders relax, and we get up to go.
This is how it often goes with Violet. She gets stuck in “No.” She doesn’t really mean it. It’s just that it’s the only action that feels safe anymore, since the illness started scrambling her neurons, causing her to forget things. I guess saying “no” to everything makes her feel in control of something. I have to trick her into saying “yes.” She has a soft spot for animals, so that’s always a good place to start.
Tomorrow we’ll go to the zoo. She’ll say, “No.” But I’ll tell her how the giraffes just had a baby and it’s still wobbly and making mewing and snorting noises. It may not be true, but it will get her to “Yes,” and then when we get there, she won’t remember about the giraffes anyway. But she’ll point and laugh at the penguins, monkeys, and lemurs, even if the memories disappear by the next morning.
I often wonder what it must be like, not to have a past or a future. What would it feel like if I could live only in this moment I’m in? Violet and I watch the squirrels every day. I’ve seen them before a hundred times, but today is always her first time. She giggles like we’re in grade school again.