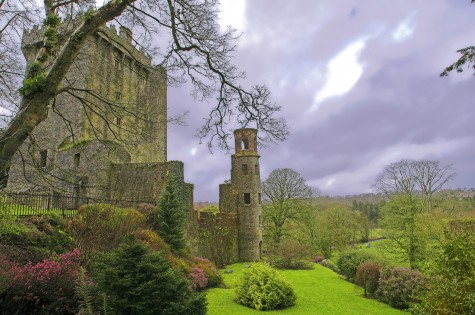 “You have to,” Clarence spat back through the gap in his buck teeth. He held out a rusted key.

Tommy eyed the crowd around him. They were all bigger than he was.

“Yeah,” Seamus chimed in, “otherwise, Clarence stole the key from his dad for nothing.”

Tommy didn’t say anything. He stared at the clovers at his feet. Somewhere behind the trees hedging in the field where they stood, a sheep bleated.

In the distance, surrounded by a moat of green hills and crumbled rock walls, the outline of an old square castle filled the sky, just as it had when he’d gone on his field trip there weeks ago. But he’d barely made it to the top of the turret. Mrs. O’Conner had held his hand the entire way up the cramped staircase. But as soon as he felt the wind pulling him at the top of the castle, he’d started crying, begging to go back down, earning him the nickname Terrified Tommy.

Tommy outstretched his hand demanding the key. It was cold and rough against his palm.

“We’ll be waiting right below, and we’ll know if you don’t do it,” Clarence shouted.

Tommy trudged across the field toward the castle. Around him, deep emerald hills raced off and collided with a perpetually grey sky. The hills always looked more vibrant when they didn’t have to compete with a blue sky, as though the green was trying to make up for the lack of color elsewhere in the landscape.

Tommy pushed the key into the gate padlock. The castle fortress blocked the light from the rising sun. The gate squealed open. He crept into a tomb-like room. Caked dirt floors and thick walls blocked out any light. Empty alcoves held ominous shadows, and fireplaces became deep caverns. Stones piled atop one another led to other floors. Taut ropes, frayed from overuse, acted as guardrails.

Tommy pulled himself up the steps. When he entered the spiral staircase, he didn’t breathe. He clamped his eyes shut, took hold of the rope and used it to guide himself. Up and up he wound through the castle. Unreadable plaques stood guard on the walls. Thick cords roped off rooms with missing sections. The uneven levels blurred together, each a murky offshoot from the staircase. Just when the darkness of the staircase threatened to overwhelm him, he broke through a tiny doorway to the battlements. Fresh air rushed over him. But he didn’t let it take his courage.

He sunk back against a wall until everything came into focus. It looked outdated and shabby without all the tourists decorating it. Tommy almost missed the stone, without the little man waiting there to support those who wanted to lean back and kiss it.

He inched his way along the wall to the Blarney Stone. A small grate waited beneath the stone to prevent tourists from falling. Through the bars, Tommy saw the boys waiting below. His vision reeled, and he recoiled, clawing at the stones beneath him. He lay there until the dizziness passed. Summoning all his courage, he eased down onto the grate. His sneakers squeaked on the bars, threatening to send his thin legs through the gaps. He braced himself against the stone. Bits of green moss clung to its crevices.

He unzipped his pants and urinated on the stone, arcing to write his name across its surface. The word was unrecognizable. Several amber drops rolled down the stone and fell through the grate. He hoped they’d land on Clarence, but he knew Clarence was smart enough not to stand that close.

As he zipped up his pants, he turned to find the first rays of sunlight greeting him across the expanse of green hills. Going down was much easier. He retraced his way through the castle, making one stop at a fireplace along the way.

“You weren’t as scared as we thought,” Clarence said as Tommy reached the gate. He held out his hand. “The key,” he urged, when Tommy didn’t move.

“I hid it in the castle,” Tommy said, watching their mouths fall open in disbelief. “It’s just a little game.” He left the boys standing there as he climbed the hills, heading for home.