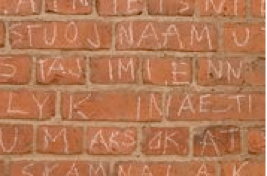 A free hour between meetings is reason enough to leave campus, to chase coffee and errands. The suburban streets have settled into the lull between lunch and the first lap in the long story of rush hour. On the raw edge of the new big box strip, there’s no one but me, slowing to make the turn, and a man standing at the corner, looking right through my windshield as I approach. He doesn’t have a windshield: he has a cardboard sign and my eyes graze it so quickly that if a detective later, investigating a crime, were to ask me, all I could offer would be guesses, the usual suspects: “homeless”? “please help”? “god bless”?

But there is no crime here, just a middle-aged woman slowing to turn, a short haired man wearing camouflage pants and a khaki
t-shirt and his dun-colored sign. And because we need to make stories as much as detectives need answers, mine begins spooling out behind my forehead: about a veteran, a tour in Iraq, maybe two, which is why he has lost his place here, because he was sent there. He is behind me now (rear-view, ephemera, red light), but I am still imagining him waking up this morning to pull on those pants purposefully, camouflage part of his presentation, soldiering and sacrifice the brand he gives to his product, which is the cardboard sign. He was holding it gut-high; he was standing on the side of the road, claiming the no-man’s land between the clean sidewalk and the dirt median, strawberry fields, horizon. Farm workers in the far distance bend to their small wheeled carts in the low rows of red fruit, dots near the highway.

The light changes and I go on, spooling, riffing: camouflage. IEDs. Don’t forget to buy stamps. On the evening news, this war’s signature wound is traumatic brain injury. First stamps, then Starbucks: SBUX on the NYSE. We Make Money the Old-Fashioned Way: We Earn It. Talk to Chuck: Charles Schwab. The best money-launderers endure, day after decade, punctuating the news bites with ads that fibrillate between high fustiness and low familiarity, pinstripes or plain folks.

At the post office, the sun is benign, I leave my car comfortably paused between parallel painted lines, there’s very little wind, and inside I join the queue with my envelopes, before and behind my fellow executioners busy with our days stretching out toward our individual evenings, defining our territories by answering our cell phones and cleaning our guns and polishing our swords of casual inattention.