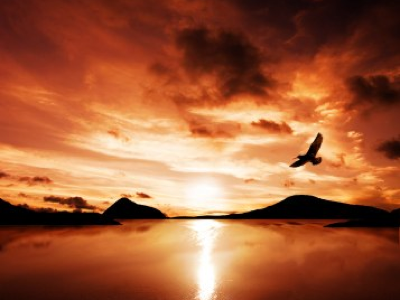 Mornings on Discovery Bay, three hours northwest of the din of Seattle, tucked away under the mouth of Puget Sound as it kisses the lapping waters of the Strait of Juan de Fuca, are peaceful, gentle affairs.  As the sun rises through the damp, chilly Washington air, a groggy bald eagle wakes, ruffling its feathers in the rays of sun speckled by the canopy of pines huddled together, surveying the curious and hungry fawns below.  The eagle cranes its neck over the rim of its meticulously crafted nest, watching as a twig falls carelessly to the soft brown earth.  Without pause, a fawn continues to rummage lazily, poking its friendly nose through the leaves of low-lying shrubs, surely waking a squirrel or hare from the night’s rest.

As the sun blankets the bay, cutting pockets into the morning fog, the eagle stretches its talons as it prepares to break the fast of the night before.  Opening her wings, she glides along a thermal convection current into the capacious bay.  Her radar-eyes scan the icy waters that once ushered George Vancouver into the state.  The Discovery was the first of what would be a steadily growing number of vessels to make Discovery Bay their point of entry, leading many to believe it would be the largest shipping port on the west coast, until the Depression sucked the life out of the growing economy so quickly the rows of Victorian homes lining the shore did not have time to be torn down, leaving them frozen for several decades until a paper-fueled renaissance stirred the local economy again with the business of milling the very redwoods now surrounding the waters.

Ghosts of ships past dot the water, their heavy cloth sails unfurled, flapping in the breeze.  On the deck, the chatter of boots echoes against the cliffs as sailors discuss their months at sea, the wives they will return to, the women they intend to meet on shore, who might be buying the crates of tobacco they’re dropping off or the lumber they’re picking up, the newly established Freedmen’s Bureau in the South and how business might boom thanks to former slaves’ newly found buying power, and what a booming town this might one day be once the Northern Pacific Railroad connects.

The eagle circles the waters from above, her wings brushing away the faded hopes of old sea dogs, while a curious baby blue whale ambles through the breaks, startling a school of Pacific cod angling its way through the morning in search of food.  Hovering above the school, the eagle, talons extended, walks onto the surface of the bay, sending plumes of golden water straight up on either side.  She emerges from the mist clutching a fish, the bay’s sacrificial offering to its regal overseer.  She holds it firm as she sails to the shore, landing on a wide, flat rock lodged into the sand.  With a few final quivers, the fish struggles to wrestle itself free of the clutch of the bird, while the rest of the bay moves on.