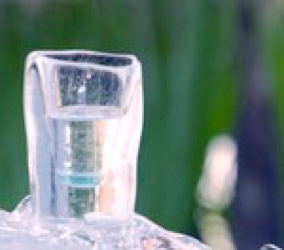 It’s cold.
The hair on the back of my neck stands up in a feeble attempt to function as an insulating fur. From this place, from the blue ice the blood is busy in everyone trying to constrict and create heat.
And from here… the brain fuses with more than alcohol.

• • •
I try not to look at the burly man to my left with the blue lips and a three-inch mustache. He orders his fourth whiskey and moves closer. He laughs at my melancholy like it was a flat thing–a dead animal to strip of its fur. Why be melancholic when you can float your thoughts on whiskey in a blue ice bar?

As he talks about his skill as a hunter on the ice, I set my gaze on the long, shiny, carved ice table to his right. It looks high class. It looks like its surface is made of Italian marble. He tells me stories of cutting up animals. I love animals. I can’t hear him, I invent my own story as he talks. As he talks and talks.
—He throws me on that table like he’s doing me a favor. He throws his fur cape down under me a little too late. He makes my ass blue with his weight—smiling like a pirate inventing his own rules. But his rebellion tires me. I take my cold feet to his heavy belly and push him away—
All of this passes through me in an instant; these away games. Its cold. And people are drunk, they are saying things that cold and whiskey make possible.

Suddenly, the woman next to me turns and asks why I am here. She has dark, thick, straight hair and three freckles on her nose. She’s wearing a camisole, a heavy navy colored sweatshirt, a short skirt and tall furry boots. I hang my gaze on her boots. What’s with the fur in this place? It’s not like everyone lives in igloos and relies on animals for their beds. This isn’t pre-civilization. This is full of the elite who, over a Cigarello and anchovies say to their friends: ‘I did it. I went ice picking—it was glassy, it was blue, I saw a fish frozen into the ice, I almost hit it with my pick.’

I look her up and down in an obvious way. I’m here to set fire to old debris in my life. I’m here…I say… to buy boots like yours and ask someone like you to hike with me in the mist.
I want to feel scared and new again.