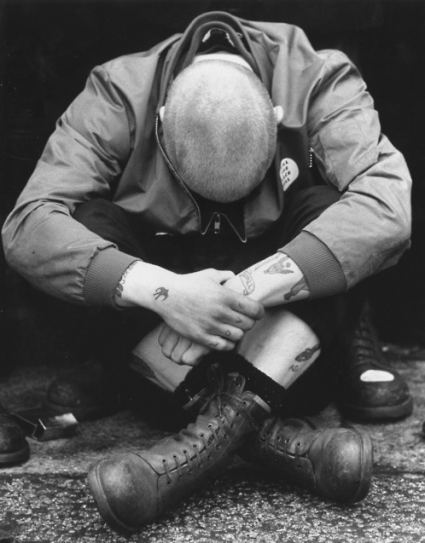 Carl and Joyce Walker could not imagine how they’d managed to create and cultivate a 24-year-old skinhead. Both were accomplished people in their own way. Curt taught math at Northeast high school in Philadelphia. He was a local chess champion. Joyce sang solo in the choir at church and collected spinning wheels. She took pride in preparing nutritious meals for her family. There were plenty of vegetables to go around. The Walkers’ political leanings were slightly to the left—conservative, in a liberal sort of way that was hard to explain. They lived in the western suburbs.

The couple had three sons. David, thirteen, enjoyed spiking his hair and wearing peculiar outfits that looked mostly like Halloween costumes. He was an average student and had recently discovered girls. Steve, twenty, was finishing his last year at community college. He was engaged to a lovely girl, Jill, who was planning to attend veterinary school. Steve had met all of his developmental milestones as expected.

But Greg, Greg was a problem. He had no job, no ambition, and played guitar in a white supremacist band. Greg considered himself to be a gifted lyricist, spewing hate and anarchy into every discordant note. He was particularly proud of the songs he’d written for The Hoods. The Hammer of God kept pounding in his brain, in perfect rhythm with his heart. He sported a variety of tattoos and piercings, including several colorful swastikas, some with thunderbolts. His soiled socks, empty beer cans, tissues, and cigarette butts littered his room and the hallway.

Greg’s parents told him that they loved him very much but wanted him to move far, very far away. They gave him $1000 in start-up funds. Greg did move but not far. He settled in Scranton, Pennsylvania with a group of like-minded contemporaries, and proceeded to search for minorities to beat up on Friday nights after their white power concerts and several beers. At times, the beatings were so severe that the victims were simply left for dead. Sometimes, Greg was afraid that they were dead.

Keith and Matt had been arrested on weapons and assault charges, Jason with terroristic threats, and Greg with ethnic intimidation and institutional vandalism. The group of four lived over a vacant hardware store in a gritty area of the city. They decorated the walls with Iron Crosses, SS insignia, and faded pictures of Hitler. Workout benches served as tables and chairs. There were no beds, only camouflage sleeping bags. They all shaved their heads, except for Jason. He preferred a swastika set into his hairline. The four occasionally found snow removal work in winter and warehouse jobs at other times of the year. They led a minimalistic existence, which didn’t bother them much. They were part of the Aryan Nation.

Every Tuesday and Friday at six a.m. Greg laced up his steel-tipped boots, put on his plaid flannel shirt and well-worn jeans, and ambled around the corner to McDonald’s. He ordered black coffee, fries, and an Egg McMuffin. Greg relished the time alone even though the coffee was far too strong and the McMuffin too greasy. “This has to be foreign coffee,” he thought. He’d been thinking a lot lately. The guys were getting on his nerves, and he no longer felt a thrill from battering people senseless. He felt lost.

McDonald’s was usually deserted at 6:30 in the morning, except for the help. Karen Patterson took his order most days, smiling. She was a wide woman, friendly, and black. Greg never said “hello” or thanks” in the year and a half he’d been a patron there. Sometimes she’d ask how he was or comment on the weather. He never responded. Greg wanted to hate her.

The tattoo parlor was only three blocks away. Within an hour Greg flashed a new swastika on his right hand. When he made a fist, he felt as fierce as a tiger.

The following Tuesday morning Greg surprised himself trying to conceal the tattoo with his sleeve when he paid his bill. But Karen noticed it anyway and paused before giving Greg his change. She looked at him straight-on and said, “You are better than this.” He grabbed his change and never returned. Secretly, he hoped she was right.