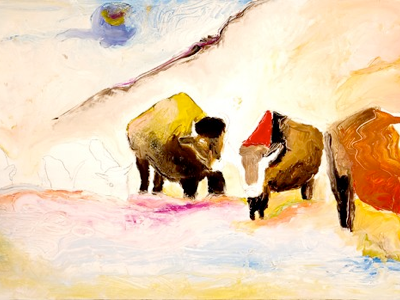 Trying to get to West Yellowstone for work, I caught a train on a milk run out of Twin Falls up to Rexburg, Idaho; riding with the rail men in the wooden caboose, a pot belly stove fired up with coal to take the chill off the 5 a.m. morning. About every two to three miles the train would stop where dirt roads crossed the tracks, and we would drop off 10 gallon, mushroom-top, metal milk jugs weighing about 80 pounds each, and pick up the empties. I never saw anybody, but helping out paid for my train ride.

From Rexburg it was about a ½ hour bus ride up to West Yellowstone, but today there were no buses running. Sitting at the train station mulling over my situation I noticed a green and white Chevy going up the street to its end, turns around, comes back to the station, and in a swirl of dust goes back up the street again. I’ve never seen a car pacing back and forth; I motion it to stop, and it does.
Approaching the drivers side the window rolls down, and a young man, about my age, is sitting behind the wheel.
“Nice car, yours?”
“Yeah”.
“I saw ya driving around, and wondered if you’d drive me up to West Yellowstone. I’ll buy the gas and a six pack. That’s if you want to, and you’re not doing anything else?”
“Sure. Nothing better to do, my mom just died.”
The ride was long and silent. Some days there’s nothing better to do than putting some miles on the pain to wear it out.

Excerpt from “Pistol whipped and left for dead in Idaho. A comedy of two acts.” Ben Garlow 2008 copyright