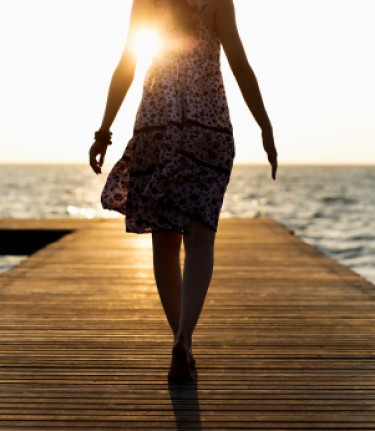 It wasn’t Mexico, the coast of France. I was meeting a girl, somewhere near Beaulieu. I had an address in my pocket for some bar. The train from Nice was empty. Three pm.

Out the window, limestone dust coated every blossom. We didn’t go near the Chagall Museum. She’d told me on the phone she liked the place, but it’s a long walk from the station, and besides, I was going to her, not the other way around. I counted the stations along the way: Villefrance, Cap Ferrat. You’ve seen them in movies without realizing it. To Catch a Thief, Casino Royale. The whole place is like a myth, but with traffic.

Next stop, Beaulieu. I descended from the train. There’s nothing there except the cliffside to the north, and the midland sea to the south. Oh, there’s a goat path up to Èze, and you could go up the steps to the Corniche, but other than that, just the tracks. It’s no place to be.

I walked along the tracks into town. Marnie was Canadian, and I wasn’t sure I’d recognize her. I’d only seen her once, and then for coffee in town. It turned out she recognized me.

She was waving from the tables at a seaside bar. She had to walk out past the Pernod umbrellas, and the tourists. A long skirt, a loose cotton blouse. The necklace was African, hammered copper or brass, I couldn’t tell, it was reflecting too much sunlight against the dark blue fabric, and I was still 20 meters away. Hiking boots. I told you she was Canadian.

Did I mention her green eyes? I think those lured me this far, along the coast, where the sailboats wove themselves through the rented yachts. My daily existence was nothing like this; it was mopeds and autocars, and chalk dust on my sleeves. But here she was, right in front of me, pouring my eau-de-vie.

Everyone had a reason for being here. Hers was simple. Ottawa had sent her to Kenya. Now her scholarship was up, her term there finished, she was on her way home. But she couldn’t quite bear to get on her connecting flight. She’d walked out of the airport with just her bags, and found a place to stay out on the cape.

The eau-de-vie made me chatty, something I’m normally not. She told me about her year, the snow, the savanna, a tall young man she’d set those pretty green eyes on. I almost asked her if she’d been traded for goats, or bartered in some other way, but she beat me to it. I guess she was used to telling the story.

He couldn’t take her back to his home without permission from someone. She had no family there to ask, so he decided to ask one of her professors. He was English, and deeply embarrassed. Imagine, you have a student, and some young man comes up to you and says, “Would it be alright if she came to my house?”

“He looked at me, and I nodded. So he made a big show of giving his blessing. Very formal. It was hilarious. The English, you know.”

I didn’t know, no one ever tells me these things. There are English all over Nice, the main boardwalk is called “The English Promenade.” I avoid the place.

“I didn’t end up going home with him. He was too worried about what his family would think if they found out. We went for dinner, and he walked me back to my dorm.”

I needed a change of scene. I didn’t want to talk about some other man, even if he was a continent away. We walked down along the beach. There was no sand, only flat river stones, trucked in. I picked one up, and skimmed it over the surface of the water. It bounced six times. She liked that. She liked watching them slide out across the water. She counted: one, two, three…

It didn’t last. We found another bar. She made jokes about the Queen. I wanted to ask her if she’d come back to Nice with me, but I knew it was too soon. The sun was beginning to set.

Those green eyes were set off by the copper necklace, and her blue blouse. Almost as if she’d planned it all, almost as if she wanted to paint an image in my mind for me to carry back with me on the train.