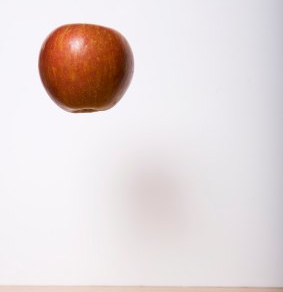 The story we usually hear about Sir Isaac Newton is that one day, by chance, an apple fell and hit him on the head and inspired the theory of gravity.

But it wasn’t chance that caused the apple to fall.

On that fine sunny day, he was leaning against the trunk of a tree playing with a glass prism. Newton caught a ray of sunlight in the prism and, just as the spectrum of colors spread out before him, a genie wearing a tweed jacket and a powdered wig arose out of the light.

"Hello!" it declared, "I am the Occidental genie!"

Newton was horrified. The possibility of a genie contained within the properties of light was inexplicable to his scientific mind. But Newton, assuring himself that there is a natural explanation for any observable phenomenon, regained his composure.

"Okay," he said, remembering something, "isn’t the man that frees a genie entitled to wishes?"

The Occidental genie waited, rubbed his transparent chin, and said,

"Because I’m not that type of genie."

"Then what type of genie are you?"

"One that is nobody’s slave! I do indeed have wishes to give but I’ve come to the conclusion that it’s inappropriate to just give people what they want whenever they ask for it. I like guessing what they want and then giving it to them."

"Absolutely not," said the genie.

"You want very badly to be hit in the head."

"I can honestly say I don’t want that," Newton responded.

"Yes you do," the genie insisted.

"Not a genie at all, really," Newton said Britishly, under his breath.

"What kind of genie tells a man that he wants to be hit in the head?"

"One that’s nobody’s slave!" the Occidental genie chanted like an ancient song.

And with this the genie vanished upward into the center of the sun, becoming one with the rays of pure light streaming through the branches of the apple tree.

Frustrated with this encounter, Newton leaned back heavily against the trunk of the tree. When he did this, his back hit the trunk with just enough force to cause a ripe apple to fall from its branch and hit him on the head.