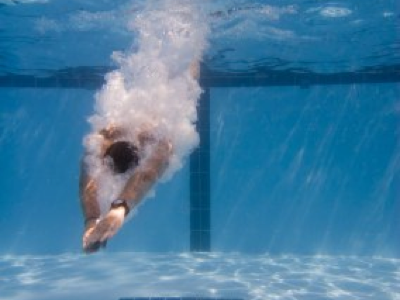 My two neighbors cut their grasses together, the same day, the same hour every week. I sneeze and think of water, the olympic size pool I’ll swim in later. It’s my respite; the large body of water that flushes the fuzzy little ants of worry into the wavy folds behind me. There is a knock at the door.

One of the neighbors, well… I gave him two dollars to a few weeks back. Today he asks for seven. His story is always the same, “his kids aren’t home, he needs his medication.” My other neighbor  said to me last week, “Oh him. Didn’t anyone tell you? He’s a gambler. We’ve all been hit up. You’re just new blood.” Perhaps he took advantage like this early, never stopped, and now into his sixties he runs the same red sentences over and over, and cuts the same grass over and over, while telling himself the story that gives him hope. He has a game in his life he doesn’t quit.

Sunday morning 8:29, the church bells ring from in the Catholic church a block away. People shingle the streets—their cars, shiny and glued together like a centipede. They put their road rage aside for this. They walk in a sort of dazed, space economical way—making room for one another in foot traffic. They are open-mouthed inspiration receiving, patent-leathered shoe people. They are scrapping for something to feed their souls the clear eyes of a child, the heart of a dog, and smiles that are fundamentally natural. Scrapping for band-aides for their blistered feet, caused by hard shoes that are worn only on Sundays. They want something white, pillowy, soft skinned that leans into their goodness. Something they imagine can be absorbed into their bodies, in the prism of the stained glass church windows—something, God gives. This church has a progressive God, a man God, a Lone Ranger God who will take everyone home. Everyone, that is, who scraps and sacrifices; everyone who gives their name to him.

In this neighborhood this is no secret.

I pick up the swimming equipment and water resistant backpack with all my gear and head out to the car. The streets are filled with green–fluorescent light. The dogs bark, the chubby cat rolls down the gardened, bulky, sinewy yards full of sunflower and Irises.

As I open the car door a squirrel drops walnut shards on my head. I look up at the king of the scrapper world. It looks at me, challengingly, like, yeah, what are you going to do about it? The squirrels have the most fun here in the neighborhood. They don’t go to church, they aren’t working for progressive ideals filled with inherent contradiction, they make a profession of taking advantage of us humans—they laugh at us. They are always chomping like otters on something; corn husks, sunflower seeds, roasted almonds from Wild Oats Food store provided by amused, gullible humans. They look at you blankly, like what do you have for me today— like it’s expected, like it’s the best thing you could do with your useless human life; to be taken advantage of by the neighborhood’s fat squirrels. They weigh nothing, give you nothing and expect everything. We give it to them.

I drive to the pool and see the neighbors having an all neighbors yard sale to save the trees. Neil Young plays from one of the houses, windows open wide. There falls a dusty rain; so light it can barely be felt. I stop to give them five dollars to help keep the woolen tree tops going. I cheer for the fluorescent green, that like the stain glass windows in the church, give me a sense that god is everywhere. Someone asks for my email address. The homeowners, they need volunteers. “Speak! Help us!” they say”, a large market is moving into the neighborhood. Save us from the cars.”

The water. I enter it and I’m grateful for it’s stubborn, pushy resistance. Something to push into. Something already collected, that moves when I move. I see something shiny on the bottom of the pool. I think maybe it’s the citron earring I lost last week. My ears fill with a stinging pressure as I scrape and scrap at the bottom. Is there something here that the water has saved for me for a whole week? Something preserved, unmoored, untouched that is mine, there, at the bottom of the dark blue? The silver candy bar wrapper buoys up as my weight moves the water. I rush up to the top to get air and sneeze immediately.

A man asks me if I would time-share my goggles, “take turns?” he asks.

Here, sure, you can have them, they are yours. I think this is what I will say. This is what I would normally say. I think of those squirrels in their selfish joy. No community to make, no trees to save, nothing to do but eat, eat, eat. The water is my food. I reach for the goggles to give to him because it’s the right thing to do. And then before I know it, I push the goggles back on my face and dive back into the water—into the deep promising sound of no sound at the bottom of the pool.