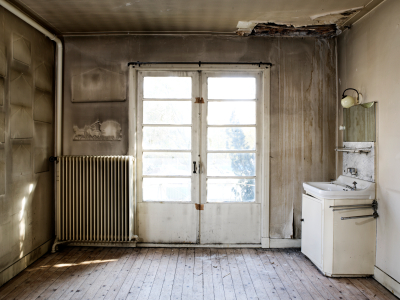 Germs don’t live in the cold. That was my first thought when I woke up in my frigid bedroom beneath starched sheets. Creases still ran from end to end where they had been folded in their packaging. I traced my finger up and down one of the ridges. My alarm went off moments later. I turned it off, careful to touch only the middle of the button. A little worn spot was beginning to develop there. Sarah would have to buy me a new one.

I would tell her that when she came to pick me up, when we finally left the apartment together. We’d been working up to that for months. And today was the day.

I sat up and slid my right foot over the edge of the bed and made sure it was in the white slipper before moving the other leg. I got up quickly and moved to the window framed in by the blank white walls. I drew back one of the curtains, careful not to touch the lock or sill, because I wanted to see the weather, the only thing that caused any sort of variance in my routine.

It was drizzling down spurts of rain, which meant it was cold. I dressed in the pants and button up shirt I’d laid out the night before. I sat in the blue chair facing the door. From there, I could see everything I needed to: the window to my left, the door straight ahead. And as I stared at it, a knock sounded.

I paced back and forth for a minute. I was wearing a track in the wood, but I would never consent to have a rug put in.

I just had to open the door. One turn of the knob. But had Sarah touched the knob the last time she’d brought over my groceries? I would’ve cleaned it after anyway. But what if some of the germs had survived? They could be dripping colony-forming numbers off the handle right that very moment.

I pulled my long sleeves down until they covered the palms of my hands. Then, I pulled on the handle. For a brief moment, my heart sped up as I felt cold metal touching a small part of my hand. My hand recoiled. But it had only been a button on the sleeve of my shirt. I hadn’t actually touched the door handle. I contemplated getting the oven mitts out to act as my gloves but decided against it.

I took a few deep breaths. Without removing my other hand from its cocoon inside my sleeve, I adjusted my shirt so that the button wouldn’t brush up against my skin again. I stepped back three steps and then approached the door again. I reached for the handle. I felt only cloth. No metal. I pulled, and the door gave way.

Sarah stood there, bags under her eyes, hair done up in a tight bun. Her dark pantsuit looked almost black in the light of the hallway.

And that’s when the light behind her flickered. It cast a quick shadow on the railing leading down the stairs. The metal had eroded away under the constant touch of people tracing their hands along it. If that’s what the handrail looked like in my building, a building where only a few families lived, then what was it like beyond that? I’d be diving into a cesspool of unimaginable proportions. The germs were probably flooding into the room even now. Every breath Sarah took was like an aerial assault of arrows shot at night when the enemies’ defenses were down.

I slammed the door and stood staring at the blank walls.

“Jimmy,” Sarah’s strained voice sounded through the door, “I bought you a new pair of gloves. If you come out, you can wear them to go see Dr. Hudgens.”

“Alright, Jimmy,” she sighed. I could hear her tucking the gloves into her purse. I could never wear them now. “I’ll come back tomorrow.”

After her footsteps receded, I pulled out my can of sanitizing wipes. I inhaled the lemon fresh scent. It was like my personal cologne, and it was better than lavender for my overtaxed nerves. I took out a wipe and began to clean every inch of my apartment, starting with the door.