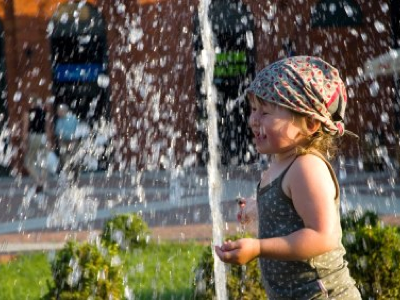 The fire hydrant shot water onto the street with the force of a tidal wave.  A long, black boy with a small curve in his back and arms that seemed, like stringy noodles,  to stretch past his knees, braved the savage force with a square board fashioned out of the top of a broken coffee table.  He meticulously slid the board under the jutting water, forcing the wave into the air to be released into millions of water droplets, dangling like icicles dripping onto the sidewalk.  Like a maestro conducting a symphony, he lifted the board, entreating the notes of water to rise higher and with a flick of his wrist, he lowered the board, allowing them to shoot onto the ground like the last melody of an aria.  As he stood behind the hydrant, straddling it like a wild horse, the water sprayed into his smiling face.  The muscles of his stringy arms, jumped up and down in excitement, allowing the crisp cold of the water to tattoo small lakes and rivers into his skin.

The many children of Lincoln Park gathered around the front of the hydrant, moving as if in a tribal dance, thanking the weather gods for the end of a long drought.  With their hands outstretched to the sky, and their faces upturned to the once offending sun, they lapped up droplets of water that rained down on them, oblivious to the fact that their own parents, and maybe even grandparents had generations ago participated in this same ritual.

Laurie sat with her son Dereck in her car, peering out at the celebration, remembering her own role in the dance. On most summer mornings during her childhood, she’d sit shoulder-to-shoulder with Mary and Tom-Tom, her little sister and brother, waiting for some brave soul to walk out of his home with a wrench as long as her thigh and unveil  summer relief.   After the traditional check for the police and one or two threats from the oldest villagers, villagers who as children had participated in this same ritual, the black knight in cut-off shorts and a white tank top shirt, would place the large wrench on the hydrant and jump, forcing all of his weight onto the stubborn cap until there was a pop and a sizzling sound escaping the hole.

Laurie, with Mary and Tom-Tom would vault off of the porch into the street, grabbing at feathers of water until they were immersed in it, sheltered by the wall of coolness.  They’d hold hands and do-si-do around the beads of hydration.  Laurie and Mary would twirl like African ballerinas, their legs jutting up to the air and their hair dancing a small jig of its own.  They’d do this until they couldn’t anymore.  Even if the bottoms of their feet and the palms of their hands had wrinkled to the point that they resembled an old man of ninety years old, they, like all of the other park children, stayed on that street, under the shelter of the water, until the fire department came to shut off the valve.

Dereck enviously watched the children taking turns running through the wall of pseudo waves.  He laughed as pretty girls who were wearing their project best, were forced into the water by their boyfriends or brothers.  Even they laughed as the water washed away the hours of work that they’d paid for at the local beauty salon.  He wanted to join them, to prove to his mother that he could be one of them, that he could be like she once was.  He leaned toward her, with almond eyes, pleading for a chance, a chance to carve his own way, to journey through the same dark roads that she had traveled, roads that had placed her right where she was in that moment.  His tongue turned and turned in his mouth, searching for the words that would free him and free her.  As soon as he’d grasped a line that he thought would sing of liberation, self-doubt set the words afire, weakness began to bite at his skin, and surrender muzzled him.  He retreated in his seat, a battle fought and lost within himself.

She had also wanted to join them, to let down her guard, to grab her son’s hand and let the water pour on them together, uniting them despite the differences of a generation.  She wanted him to know that part of her life that had been illegal, but also innocent and beautiful.   She wanted the strength that she had implanted in him to bow within his body, to arc him into action and move him into his rightful place, alongside his peers, alongside young princes.  In that moment she needed to touch him with her words to allow their sentences to discover each other and eventually link together like the hands of new lovers.  She imagined herself communicating with him as she had when he was a baby, holding him high above her head, watching the toothless smile spread across his face, saying with eyes what they could not say with words.  With a heaviness that pushed her heart into her stomach, she knew that she’d have to set him free, to watch him move from baby to boy to man to king.  To allow him to put into practice all of the lessons that she had poured from her soul into his soul.

But, she was not ready yet.   She stopped short of beginning that dialogue, beginning that dance.  With the beauty of her past that she wanted to gift him, came something entirely different, something guttural.  She couldn’t be certain that he would be able differentiate between the two.   So they sat and they watched as the moment, the possibility of that moment journeyed alongside the curb and down the drain, like the history attached to the water spouting out of the hydrant.